Overheard at A Night of Taxidermy, Mods vs. Rockers, and the Museum of Negro League Baseball. 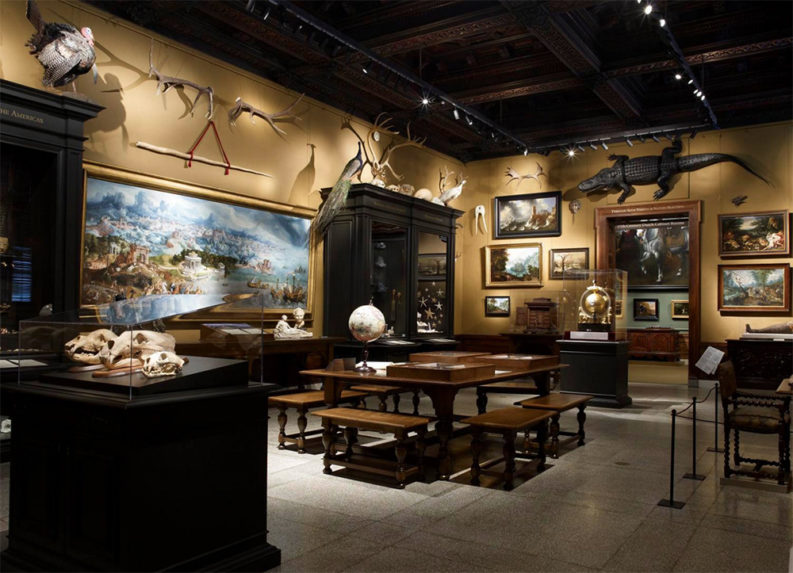 -Courtesy of The Walters Art Museum

Surrounded by Egyptian mummies, a “unicorn” horn, Buddhist statuettes, a leopard skin—head attached—and a stuffed alligator, The Walters Art Museum’s Joaneath Spicer explains to the packed Chamber of Wonders crowd that Renaissance noblemen often collected curiosities from around the globe.

“Partly, it was trophy collecting, like today, but they were also trying to understand God’s plan. Astronomy has shown that the Earth isn’t the center of the universe as the New World and other cultures are being discovered by Europeans,” Spicer says. “A squirrel might not be proof of God’s handiwork, of a miracle, but a flying squirrel—that’s a different story. That you’d have stuffed.”

The curator of Renaissance and Baroque Art, Spicer is hosting this evening’s event, Memento Mori: A Night of Rogue Taxidermy, along with taxidermy artist and author Robert Marbury and the Hampden shop, Bazaar Baltimore.

Meanwhile, in the Sculpture Court, artists have created pop-up exhibits for an “alternative” taxidermy competition. Efforts include a pistol-toting rat standing on its hind legs, a mixed-media painting with actual pigeon wings, raccoon heads on dinner plates, and a loin-clothed “sacrificial” lamb nailed to a cross.

There’s also a “jackalope,” the mythical American creature described as a jackrabbit with antlers, and a similar taxidermied “porculope” by artist Karen Nemes, who trekked from Indiana for the show. “A friend found it [the deceased porcupine] alongside the road. I can’t tell you how many times I got pricked sticking its needles back in,” the bubbly Nemes explains. “I mean, I play with dead things. I’m just happy people here seem to like my work.”

With that, “mod” Janet Gripshover, in big, round sunglasses and knee-high stockings, oh-so-gently throttles her sleek Stella scooter as her “rocker” husband—in black T-shirt atop a 1970 Honda 350 motorcycle—does the same.

The 6th annual Charm City Mods vs. Rockers highlight “race” is literally a contest of who can ride the slowest until one rival loses his or her balance. In their heat, Gripshover’s burly, bearded husband puts his foot on the ground first—to the cheers of rowdy fans behind Dundalk’s American Legion Post. “I get a lot of practice maneuvering in and out of our alley in Mt. Vernon,” she smiles.

Festivities also include vendor, club, and custom-builder displays, and music from the bouffant-sporting Fabulettes. Bikes and scooters vie for awards in various categories, including best “Retro,” “Modern,” “British,” and “Café Racer.”

It’s all a celebration of early-’60s British subcultures, which occasionally clashed on the front pages of London’s tabloids. “Café racers”—lightweight motorcycles with dropped handlebars—got their name from disaffected youth racing from one cafe to another and back, organizer Tim Carter says. “They’d put a song on the jukebox and the idea was to get back before it was over.”

For most, experiencing a similar thrill is still what riding is about. “That’s a ’74 Vespa Rally 200—sexy Italian body—with a 225, two-stroke engine that I put in,” says Nicholas Mulkey, a restoration specialist, pointing to his scooter. “Even with my fat, 210-pound ass, I can go 95 miles per hour on that thing.”

At the State Fair’s Exhibition Hall, fans of baseball history stare in awe as they come across the nearly life-sized photos of Hall of Fame catcher Josh Gibson and pitcher Satchel Paige—and pictures of the Baltimore Elite Giants and old Bugle Field, which hosted the Negro World Series in 1943. Their eyes grow even wider as they meet Luther “Luke” Atkinson, 78, here in uniform, and learn he played second base for the Satchel Paige All-Stars.

The display is associated with the Hubert V. Simmons Museum of Negro Leagues Baseball in Owings Mills. “I started playing for $10 a week for the Wilson [NC] All-Stars. I signed on with Satchel Paige’s barnstorming team after he offered me $125 a month,” recalls Atkinson, who later got an invite to spring training with the Pittsburgh Pirates. “Saw Willie McCovey there, biggest 19-year-old kid I’d ever seen, hitting home runs into the Florida palm trees.”

Eventually told the Pirate’s organization did not have room for more black players, Atkinson kept playing for the colorful Paige, whose famous line about “Cool Papa” Bell being so fast he could turn out the lights and jump into bed before it got dark was actually based on a true story, Atkinson says. “Satchel and Bell were roommates and the room had a faulty, delayed switch. Satchel took bets.”

Paige was like Muhammad Ali, Atkinson adds. “He had eight pitches, but he’d always say he had three when someone asked: ‘The first one is good morning,’ he’d say. ‘The second is good afternoon and the third one is good night.’”