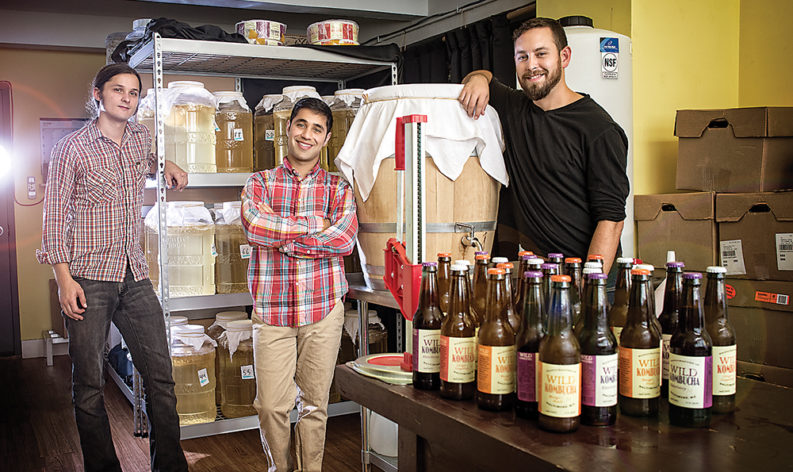 Left to right: Sergio Malarin, Sidharth Sharma, and Adam Bufano are the owners behind Wild Kombucha. -Photography by Christopher Myers

In a town where breweries are all the rage, something new is brewing in Hampden, and it isn’t beer or coffee.

Longtime friends Adam Bufano, Sergio Malarin, and Sidharth Sharma founded Mobtown Fermentation in May 2014 and make kombucha, a fermented beverage that contains green tea, distilled water, probiotic cultures, and natural fruit juices. The drink has been gaining popularity lately as a healthy substitute to soda. Bufano and Malarin—who are stepbrothers—were first introduced to kombucha by their health-conscious parents and decided to try brewing their own.

Similar to yogurt, the probiotic bacteria in kombucha is said to help sustain the enzymes that occur naturally in your gut. Kombucha is also said to aid in digestion and boost your immune system, all while giving you the carbonation you crave from other less-healthy alternatives.

After sharing their creation with friends and receiving a wildly positive response, they decided to make things official, and, with the help of Sharma, Wild Kombucha was born. Now sold at several local cafes and shops including Charmingtons, Eddie’s, and Milk & Honey Market, Wild Kombucha is available in three flavors including their latest, elderberry.

“Our recipe is refined to appeal to a more general audience,” says Bufano, who describes Wild Kombucha as simplistic and raw, with all of the ingredients listed on the label so it doesn’t intimidate people who have never tried the drink before.

“Our mission is making it approachable in price point and flavor while keeping it local,” notes Malarin.

Since kombucha is technically a “live” product that needs to be refrigerated and contains no artificial preservatives, Mobtown Fermentation plans on keeping distribution regional to ensure it is delivering quality.

“We are willing to go that extra mile to make our drink better. We are always trying to improve,” says Sharma.

With a new, larger brew space in the works and more projects on the horizon (like a probiotic ginger ale they are prepping for spring), it seems this trendy libation is here to stay. “We have a lot brewing right now—pun intended.”