The creative couple talks about authorial autonomy, the complicated legacy of The Wire, and why Simon had no idea who Channing Tatum is.

David Simon and Laura Lippman outside Lippman's office in May. —Photography by David Colwell

If Baltimore has such a thing as a showbiz power couple, Laura Lippman and David Simon are surely it. Both ex-Sun reporters, Lippman has published 21 best-selling crime novels (all set in Baltimore) and Simon is known for co-creating acclaimed television programs, starting in the ’90s with Homicide: Life on the Street and continuing today with the new HBO miniseries Show Me a Hero. (He also did a little show called The Wire somewhere in there.) The day before their daughter’s fifth birthday (Lippman ran out after our interview to buy a pet fish), they sat down in the anteroom outside Lippman’s office to talk. They started by discussing the uptick in homicides in the wake of the Freddie Gray unrest.

Laura Lippman: I guess there’s a perception that we’ve made our living off of homicide in Baltimore, and it’s not entirely inaccurate. But at the same time, I think we’ve always been citizens first. And there’s no joy in the situation. I mean, we live here. We can both have careers without there being crime in Baltimore. Especially [your work] has moved so far beyond Baltimore. There’s this perception that The Wire is about Baltimore. The Wire could have been in so many cities of a certain size and a certain nature. Baltimore was the place you happened to be.

David Simon: That’s the thing that I can’t convince anybody of now, retrospectively. I didn’t even think I was going to do TV for any length of time. I thought I was eventually going to go back to newspapers.

LL: You thought you’d be at The Washington Post or The New York Times. I mean, we didn’t really get to know each other until . . . just a year before you filmed the pilot for The Wire. I would like to have it on the record that you were actually unemployed when we started dating. [Laughs] So I look brilliant but . . .

DS: Right. You started going out with someone who did not have a job.

LL: I did have a [professional] plan. I had a co-worker back at The San Antonio Light who one day said, ‘Do you know who has a good gig? [Crime novelist] Tony Hillerman. You pick a place. You create a detective. You create series fiction. How hard could it be?’ That really stuck in my head. So, it’s 1993 when I started a very early draft of what became the first novel, Baltimore Blues. I was really following what my friend thought was a formula. I had to learn the hard way that there wasn’t a formula. So I definitely had a plan. And I am very much writing about Baltimore. Baltimore is my subject.

DS: You’ve carved out Baltimore County in eight stand-alone [novels] in a way I’ve never gotten near. We’re fishing in different holes. I wanted to write about the sociology or economics or politics of systems, and then I would actually end up meeting real people. You go right for [the personal], and then you work your way back out to what you want the themes of the book to be. I trick myself into going there.

LL: You are as profoundly uninterested in gossip as any person I’ve ever known. Even in the most lighthearted [way]. When two people like to sit around and talk about why that person did what they did, that topic is just not interesting to you. You have very little interest in pop culture in terms of who’s who.

LL: My favorite was when Channing Tatum invited us to his house for a party, and you’re like, ‘Who’s Channing Tatum?’ [Laughs] I’ve dined out on that one.

DS: I’m terrible, terrible. You’re more of the world and more of the interpersonal. I think women are obliged to pay attention to the whole of humanity a lot sooner than men are.

DS: I’m not sure I’m down with that predator-prey thing. 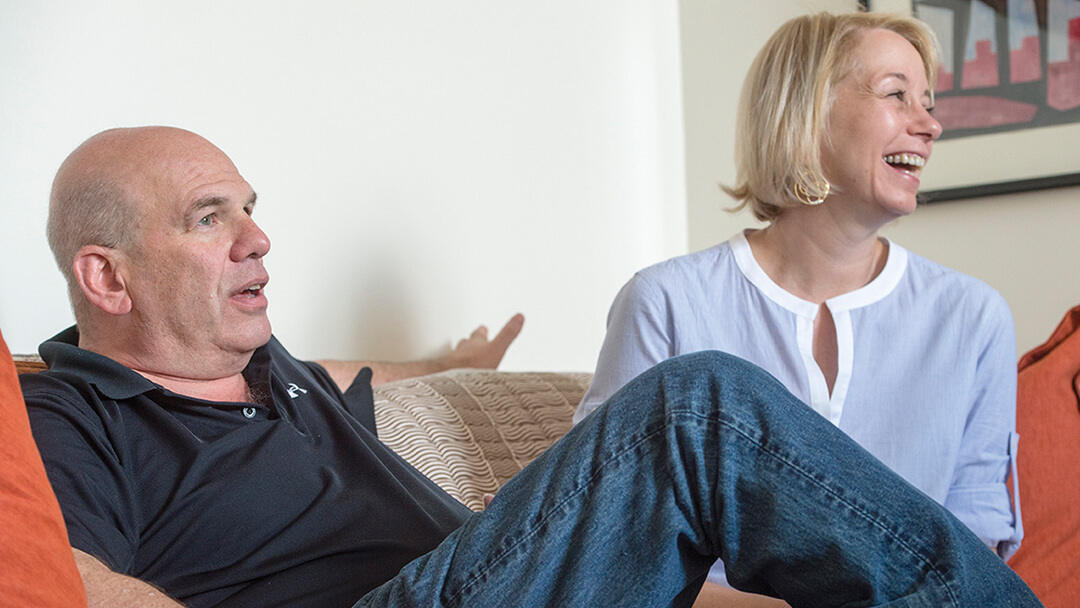 Simon and Lippman share a lighter moment in the couple's Baltimore office.—Photography by David Colwell

DS: Right. Which, by the way, I assumed was the answer. But it was sort of disturbing to me. To know that that was the level of endurance [needed] when you were a kid.

LL: And you didn’t even have a daughter then.

DS: With Treme [each female character] came out sounding different, and I was proud of that. I think when I was younger, the less I understood about women, the better. I was fairly terrified. Part of it was [the cultures I was writing about were] very male. But there’s a little bit of dishonesty if I say I wasn’t pulled in that direction.

LL: I love Treme. [But in terms of public reaction] there was this, ‘It’s not The Wire. How dare it not be The Wire?’ But it’s also this trap like, you only get to know one thing. Like, ‘You’re David Simon. You know about cops, and Baltimore, and the drug war. What do you know about New Orleans, and culture, and music?’ And, of course, you know a lot of things about all of that. I think it happens to everyone. I wrote a lot of books about mothers and daughters before I became a mom, and I was very prickly about the idea that, ‘Oh, you don’t really understand this until you have a kid.’ And, of course, every experience changes you. Sure I’m different having been a mom, but I’m different for being 56 rather than 36.

DS: Yeah. I thought when I did Treme that it would sort of be a break with all the Baltimore stuff and it would be like, ‘Okay. It’s just storytelling.’ You either capture enough reality or you don’t.

LL: I suppose it is true that if you went around the country—and even around the world—and you asked people, ‘What do you think about Baltimore, Maryland?’ The Wire would probably be top three.

DS: I feel bad when I hear people ignorantly say, ‘Baltimore is such a mess. I’ve seen The Wire.’ Because, invariably, when I say, ‘Excuse me, do you think that’s all of Baltimore?’ They say, ‘Nah. That’s just the bad parts. That’s the drug war.’ It disappears as soon as you poke at it, but you’ve got to poke at it. You can’t tell a story for that audience. If the audience is going to be that obtuse, you can’t tell any story that’s honest. . . . I’ll do an interview or write a blog, and it will come off to some people who are seeing me through the prism of TV as being like, ‘Oh, he’s looking for more attention. This is like advertising for The Wire.’ Fuck The Wire!

DS: I couldn’t sell more DVDs of that thing if I wanted to. It’s its own machine. It answers to nobody. No, I’m really interested in why [former city state’s attorney] Gregg Bernstein only charged 70 guys with murder, instead of 130 the previous year.

DS: It’s a system I was interested in, and I can’t disavow my interest. I’m like, ‘What happens when you only charge half the numbers that you charged before? Are the cases shittier?’ And I’m off and running [exploring the topic]. And I’m having as much fun as doing a film project.

DS: Maybe more. I found myself in a Facebook discussion on Ferguson, just talking to friends. And we’re in levels of detail over the specifics of the incident that I’m like, ‘My God, I’ve written more about this in the last week . . .’ And not for publication. Just to argue.

LL: You can’t draw me out to have an opinion on anything except for the occasional stats on female crime writers. Then I’ll get going but . . .

DS: Right. You’re really attentive to what you’re attentive to, and that will get you in an argument. But to me, until somebody makes it personal, [arguments] are really just an adventure.

LL: You like a good argument. Yesterday, when personal circumstances happened [and] I needed you to write some angry emails, I then said to someone, ‘Writing angry emails is David’s cardio.’ [Both laugh.]

DS: It’s true. [I] can only do it so often. Eventually, people see through the veneer of it. Like, I had a great two- or three-year run of angry emails to HBO when they were like, ‘Oh shit! We didn’t mean to suggest that!’ And then, after two or three years, they were like, ‘It’s just a Simon email.’

LL: I’m 15 years into this relationship. I guess eventually I’ll get it down.

DS: Nah, you’ve got it down. When you were only four years into this relationship you said, ‘You know, you argue best when you know you’re wrong.’

LL: Did I really say that?

DS: Yeah. It was very funny.

Simon and Lippman offered this humorous anecdote as further proof that a work takes on a life of its own—often independent of its creator’s intentions—after its release.

DS: We were on vacation.

DS: It was a long time ago.

LL: But he didn’t know about The Wire.

DS: No, The Wire had barely come on. He knew about Homicide. We caught a cab coming back from the
uh—

LL: Didn’t he ask why you looked so forlorn?

DS: No he said something about the neighborhood we were walking through was not a good neighborhood, which of course, to us, it was like, [ Looks around] ‘This is fine!’ There was nothing wrong with the neighborhood. But he said, ‘I couldn’t believe I found you out here.’ I said, ‘What do you mean, this is fine!’ And he said, ‘Well, where are you from?’ And I said, ‘Baltimore.’ [And he replied], ‘Oh well that explains it.’ And he started going into the litany of all the Homicide episodes.

LL: Yeah, he watched Homicide, and he was a real big fan. I think I finally outed you at some point.

DS: Yeah, because I sat there in the back of the cab going, ‘That’s not all of Baltimore!’ And, ‘You’ve got it wrong!’ He’s like, ‘Well, I’ve seen Andre Braugher!’

LL: Five years later, come to think of it, 2008, we flew out and [Scottish publishing house] Canongate [Books] had the brainstorm to put out the book Homicide, and you went to the UK and Ireland to tour. And The Wire was so popular in the UK that I literally watched paparazzi chase you and Dominic West through the streets.

DS: Well, and Dominic West is the operative—

LL: Well, okay. But, no, you went out to have a drink at a pub on another visit. I think when you went back for the second book tour? You went into a Dublin pub for a drink and The Irish Times sent someone to take your photograph because David Simon was having a drink in the pub.

DS: American dystopia plays real well the farther you get from America.