The WJZ and WBAL news anchors compare notes on anchoring, acting, and aging. 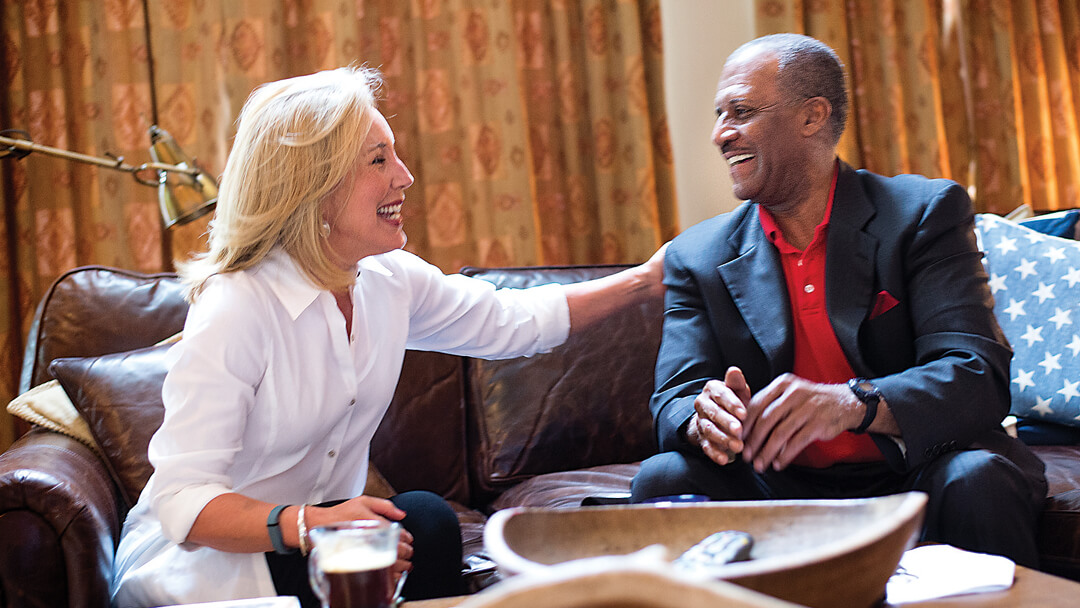 Denise Koch and Stan Stovall have a laugh at Koch’s home in June. —Christopher Myers

“ Sounds like great fun,” was WJZ anchor Denise Koch’s reaction when we first proposed a pow-wow with WBAL’s Stan Stovall. “Stan and I have never had a chance to sit and talk this way.” Despite a combined 65 years in Baltimore—32 for him, 33 for her—the TV duo has rarely crossed paths. On June 1, a cloudless spring day at Denise Koch’s Owings Mills home, the news veterans sat side by side on a large leather sofa to play catch-up after all these years.

STAN STOVALL: Last time I saw you, you were doing The Phantom Diner.

DENISE KOCH: Evening Magazine? That goes way back. I owe you an apology. You left a message on my phone after I did a story on [Baltimore Colt] John Mackey. It was so sweet of you. I didn’t get back to you—and I should have.

SS: Speaking of which, I meant to send an email to [WJZ’s] Christie Ileto when things blew up at Camden Yards [during the Freddie Gray unrest]. She kept her cool. When you have live, breaking news, the best rise to the top. The folks who were from Baltimore seemed to have a leg up on what was going on and what needed to be said.

SS: I don’t know about you, but I was on the air for seven to eight straight hours. All I did was ad lib—nothing was scripted. I just described what was going on. I would have been better served being out in the street. When things got really hot, I felt like I should have been out there to try to calm things down on both sides. My dad was a cop for nine years. I understand where they’re coming from, but I also understand the frustration that a lot of these young people were venting about. A great deal of my time was spent saying, ‘Let’s keep the focus, keep the peace.’

DK: I utterly agree. That first night [April 25] they called me in and everyone else was out of town. We watched the protests. Everything seemed fine. We programmed a normal newscast. At about 6:15, that splinter group broke off, and I had no co-anchor. We never went off the air for seven hours. I literally had to write down on a piece of paper, ‘I have to go pee.’ That night, I felt exactly what you said—my purpose was keeping it honest.

SS: You did the right thing—keeping it real. . . . I started [in this business] when I was 17 in Phoenix. Prior to 1968, you never saw anyone but white men on the news—Chet Huntley, David Brinkley, Walter Cronkite. After Dr. King was assassinated in 1968, the FCC started cracking the whip for stations to diversify. I took the job at an ABC affiliate. The second week I walked in on a Monday, they hit me with a press release and a silent film camera and said, ‘Go cover the story.’ It was a park dedication in Arizona. We were in the middle of the desert—nothing but sand. I got lost going there. I cranked off 100 feet of film, took it back to the station to process it, and it all looked black. I blew my first assignment.

DK: I started out with no idea of going into TV, because I grew up in LA. I never saw a single woman on TV news. It was Chet Huntley and Clete Roberts. It was all white guys. I wanted to be an actress.

SS: As a young kid trying to decide what you want to do in life, you look at society, you look for . . .

DK: . . . people you admire. I may be part of the first generation of women allowed to age, to be older on the air.

SS: Just think how far we’ve come since [news anchor] Christine Craft. The station said she was obsolete and too old. She was 40.

“When they hired me, they said, ‘Do you think you can sit up there with all those men?’”

DK: I was hired by ’JZ from the theater. Someone saw me at Center Stage, and they hired me. I was [freelancing] at Evening Magazine and there was an opening at the newsroom. I remember someone saying to me, ‘We need someone to sit next to Jerry Turner at the 11 to help him animate, to be funny, to be a foil.’ I would do a movie or theater review, and he could flirt with me.

DK: At the time, it was an all-male lineup, as it was most places. And it was a lovely assistant news director who said that, and I hold no ill feeling toward him, but it stuck in my brain.

[Koch and Stovall touched on many subjects but kept circling back to Freddie Gray.]

SS: I’m curious what you’ve talked about with your kids and the riots. My kids being young African-American men feel like this is [their] generation. I can understand why they’re angry. I certainly sympathize with a lot of the issues that are being addressed. My little brother was murdered in 2006 in Arizona. [My son] Stefan was shot 18 months ago, so I’m very sensitive about the crime in Baltimore.

DK: In what circumstance was your son shot?

SS: He was at a party a few blocks from Morgan State’s campus. . . . He heard gunshots, started running, and took one in the leg. He didn’t know the guys who shot him. These guys shot indiscriminately into a group of eight people.

SS: It has been 18 months and the case was just resolved in April. I have nothing but praise for the Baltimore City Police Department. They caught this guy within five days.

DK: My kids are white and in their high school class [at Garrison Forest School] of 70 girls, they were all colorblind.

SS: That generation is colorblind. In fact, my kids say, ‘It’s you old people who are perpetuating racism. You keep bringing up the past.’

[They began discussing some of the strange reactions they’ve gotten from the public.]

DK: I’ve never had anyone walk up to me and say something mean.

SS: I have. It has only happened a handful of times, but some people go out of [their] way to put you in your place. Sometimes I get, ‘Oh, you’re on TV? Well, I don’t watch you.’ And I’ll say, ‘There’s no telling for taste.’

DK: I’ve had people say horrible things to me, but not face to face.

DK: Some guy wrote me this evil email, ‘You need to retire. You need to get off the air, you witless twit.’ And I said to [weatherman] Bob Turk, ‘This man called me a witless twit,’ and that was it. From then on, that was Bob’s nickname for me.

SS: You have to take your job seriously, but you can’t take yourself too seriously. . . . Where do you think TV news is going? Max Headroom? All computer-generated? Anchors obsolete?

DK: There’s going to be tremendous opportunity in communications. I don’t think it’s going to look like what you and I do now, unless the local news remains local—intensely local.

SS: What about longevity in the business?

DK: I am amazed I’m still doing it. No one has ever said to me, ‘You have to get a face lift,’ which I never have.

DK: You were acting?

SS: The last film was Ladder 49. I had a journalist role. I was also in the Homicide movie. I played a street thug. My scene was like 35 seconds and I was beaten up. In Head of State, I was a political commentator. It was something I had always wanted to do, but hadn’t had the opportunity.

DK: I remember years ago, [casting director] Pat Moran would say, ‘Do you want to be in a movie?’ And I remember saying to her, ‘I don’t play an anchor or reporter. I am an anchor and reporter.’ I thought it would undercut what I do. Now it’s a given that people flow from one to the other.

SS: Funny you should say that, because there are reporters’ roles and news anchors’ roles that I didn’t get. You know why? Because I didn’t play a caricature of what we do every day.