The TV stars play a Baltimore-centric lightning round.

By Josh Charles with Amy Mulvihill 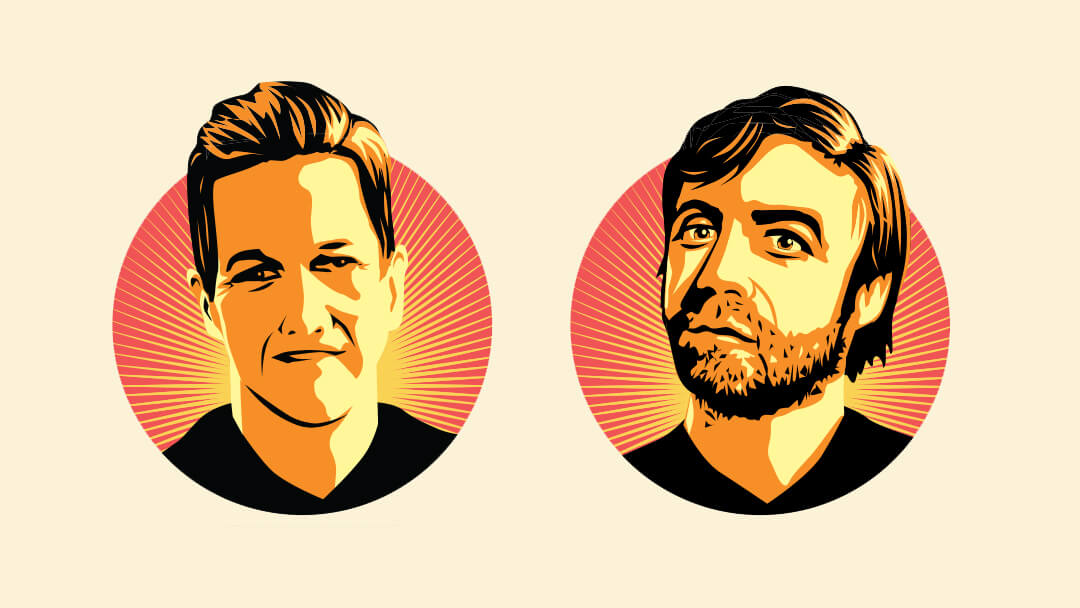 Though he has made his name in dramatic fare ranging from Dead Poets Society to The Good Wife, Josh Charles began his showbiz career attending open-mic nights at Inner Harbor comedy clubs and mimicking Richard Pryor records in his Mt. Washington bedroom. He is, in short, a closet comedy nerd. That made him the perfect conversation partner for Lutherville’s Derek Waters, who parlayed his irreverent web series Drunk History into a Comedy Central show that is up for Best Variety Sketch Series at this month’s Emmy Awards. Over dinner at a Los Angeles steakhouse, they compared notes about their childhoods and tried to choose between Buck Showalter and John Harbaugh.

DW: Technically, I’m from Lutherville, but I just say Towson to people who don’t know Maryland.

JC: When I say Baltimore, what’s the first thing that comes to your mind?

DW: Family. If you could take one place in Baltimore with you, what place would you take?

JC: I do love a good authentic diner and think we have quite a few good ones in Baltimore. Wyman Park comes to mind. I love having lunch there with my pop.

DW: Where do you find the most charm in Baltimore?

JC: I think it’s all over, but definitely from the people, especially people who work at restaurants and diners. Peachy, my favorite waitress from Sabatino’s, is the definition of charm. Love that woman. What’s one thing you do every time you visit home?

DW: For sure! There’s so much history in the state. So much fascinates me, but off the top of my head, I would love to do something about the building of the Bay Bridge, a Frederick Douglass story, Babe Ruth, or maybe the Baltimore Blast! [Laughs] I want to do everything and anything Baltimore. It’s my blood.

JC: Wait, wait, why the Bay Bridge? That is one messed-up and curvy-ass bridge!

DW: Messed up, curvy, and high-as-shit. I want to know how they built it and what was the first purpose behind it. I like to believe it was some hons jealous of other hons having more fun than them in Ocean City.

JC: Favorite all-time Oriole? And why?

DW: What a question. Damn, Josh! Why you gotta do me like this? I think I gotta go Buck Showalter. A leader is what every team needs. Out of all the leaders the Orioles have had, Buck stands out to me as the best. As a coach and a human being, he is top-notch.

JC: Your favorite Raven and why?

DW: I want to say Harbaugh, ’cause it’s true. The man cares about the game, his players, fans, and family. But if I had to pick a favorite player, I think I gotta go with Ed Reed. One of the best players of all time. Consistency. Always good.

JC: Favorite part of the city to explore?

DW: I love Hampden, Fells Point, Gunpowder River, and Loch Raven Reservoir. Is there someone you’ve always loved and admired from Baltimore that you would love to meet?

DW: If you could go back in time, what year would you go back to in Baltimore and what would you do?

JC: I would probably say 1958 to see the Colts take down the Giants in dramatic fashion for the [NFL] championship at Yankee Stadium. I imagine I would have partied on the train back to Baltimore and ended up at a diner someplace with some friends.

JC: I grew up in Mt. Washington, so that was my hangout growing up. Chick’s Legendary Records was where we got all our music, and the Mt. Washington ice rink, of course. I could be found there often, either skating or playing video games.

DW: You have to remember the first time you missed Baltimore.

JC: Yeah. I was living in New York with my brother, and I got incredibly homesick. I went home and remember going with my uncle to an O’s game at Memorial Stadium. It was a rainy day late in the season. They were out of contention, so the stadium was wet and the stands were almost empty, but I could not have been happier.

DW: What project would it take for you to wear a Yankees jersey?

JC: It would have to be a damn good one, because that would be tough.

JC: The Baltimore Colts have a special place in my heart, but I am all-Ravens, all-day now. I think it’s safe to say, collectively, we have moved on.

DW: What was your first concert in Baltimore?

JC: My pop took me to see The Police at Painters Mill. It was the Zenyattà Mondatta tour, and it was before they blew up with the Synchronicity album. Crack the Sky opened up for them, I think!

JC: What was your first concert?

DW: Not to brag, but it was at Merriweather Post Pavilion. I saw Screaming Trees, Soul Asylum, and the Spin Doctors! Yep. Favorite Baltimore saying?

DW: Is there a word or phrase you say that people go ‘Wait, do you have an accent?’

DW: Flares is also a good one.

DW: Yeah, like, ‘I bought my girl a nice bouquet of flares the other day.’

DW: Hardest question, I hate asking it, Ravens or Orioles?

DW: You are leaving a will and you can only give to one.

JC: The 1979 Orioles team was a memorable, and eventually heartbreaking, team. I sat freezing my butt off with my grandma at that final game, just gutted.

DW: Do you want to know where I was?

JC: Fuck you, man. You are asking impossible questions.

DW: I am the Geraldo Rivera of our time.

JC: [Laughs] What about you? Harbaugh or Buck?

The conversation between Charles and Waters took a lively—if somewhat ribald—detour when the subject of Baltimore’s favorite frozen treat came up.

Josh Charles: Have you been to The Valley Inn on Falls Road? They reopened recently.

Derek Waters: No, I haven’t, but if I’m not mistaken they shot a scene from the Tom Selleck picture, Her Alibi there. I never saw it, but I have not been there since they renovated it. You?

DW: I go to Snoasis down the street! [ Ed note: Snoasis used to occupy this location but was replaced about eight years ago by the equally delicious Summer Shack. Snoasis still operates a Cockeysville location on East Padonia Road. ]

JC: The snowball stand? I didn’t know that’s what it is called. I love that place. I was trying to explain to one of my co-workers the beauty of a real snowball. Not this shaved-ice bullshit they have in other cities, but a true snowball!

DW: Right, it’s not just an ice cube. It’s that smooth snowball texture. I’ve always wanted to open up my own snowball stand out here because I don’t understand why the real Baltimore snowballs haven’t made it out here. I’m going to call it D’s Ballz.

DW: What? You don’t think it will sell? ‘Excuse me, sir. What kind of D’s Ballz would you like?’

JC: Not only do I think it will sell, I am investing in it!

JC: [Laughs] Great. Are they going to have sky blue flavor, or Skylite, or whatever the hell that flavor was called?