Laurie DeYoung and Konan crack up at Rams Head Live In June. —Photography by Mike Morgan

For decades, Laurie DeYoung and Konan have dominated the local airwaves. Whether it’s a hot new rap track or a classic Southern song, the DJs have been the voices who introduced us to some of our favorite music. The two sat down together for the first time at Rams Head Live in June.

Laurie DeYoung: I came here in ’85, after I was already in [the business for] 10 years. This was my ninth station and I had never worked at a country station. For years I had done rock, talk-radio, hot hits . . .

LD: It ages well, because people of all ages like country. That’s the beauty of it.

K: It’s part of the blues that my dad used to listen to. It’s just a different version of it. The good thing about country music is young people are always coming up, like Taylor Swift, and they just fit right in. The only names making money in rock are the Fleetwood Macs, the Queens, and Billy Joels.

LD: The Stones are still touring, which amazes me.

K: That was the music I grew up on. It wasn’t broken up the way it is now. I have all those albums. I still listen to them.

LD: That was the stuff I used to play, in the late ’70s, early ’80s. I was into rock back then. Even when you look at country, those roots go back—Elvis used to be considered a country artist. There are a lot of influences.

K: My dad’s era was Motown. I grew up on Motown. Everything in our house was Motown.

LD: As a kid, I was a huge Diana Ross fan. People look at me and go, ‘Seriously? Diana Ross?’ But when I was a little girl, I used to make up these little dance routines to The Supremes. I thought she was the greatest, and then I saw her in Lady Sings the Blues—you know, the Billie Holiday story? She’s from Baltimore. I just remember there was just something about that skinny little girl. I was a skinny little girl at one time.

K: [Radio] is what I love to do. I really can’t believe the amount of money I get paid to do something I might do for free. You started when you were 19. I started when I was 19. My first check was $269 every two weeks.

LD: I think my first check was $108. I always get it mixed up with my first house payment. They were all kind of close.

LD: No, we sold it. It was a long time ago in Grand Rapids, Michigan. My dad moved around a lot. . . but I lived in Michigan a lot. I worked at a station in San Diego for a little bit, too.

“I TOLD MY BOSS, WHEN I STOP HAVING FUN, I’M JUST GOING TO NOT COME IN.”

LD: We weren’t there long. The guy who owned the station—this was back when individuals owned them, which doesn’t happen much anymore—got in financial trouble. He came and fired the morning show, the program director, and the general manager. We just walked in one morning and boom.

LD: Everybody should go through it. It gives you total empathy for others because, until that point in my life, I thought people got fired because they weren’t doing a good job, but I was working hard. It was a great lesson for me to learn, and I remember it well. San Diego was beautiful [but] people kept a distance. Baltimore was much more engaging, more neighborhood-y. It’s got more of a community feel.

K: The inner city of Baltimore was like everybody knew everybody. Growing up, you could get sugar from your next-door neighbor. We didn’t have a lot.

LD: You said that’s one of the things that really drove you.

K: Since I was 10 years old, I’ve always had a job—[that’s when I got] my first paper route. My dad was serious, like ‘Listen, you gotta do it.’

LD: I started working at 15 and never stopped. I just wanted to be out. I wanted to do stuff. I wanted that independence. I’ve always liked work.

K: I always knew I wasn’t a nine-to-five person. I was not going to be in an office. 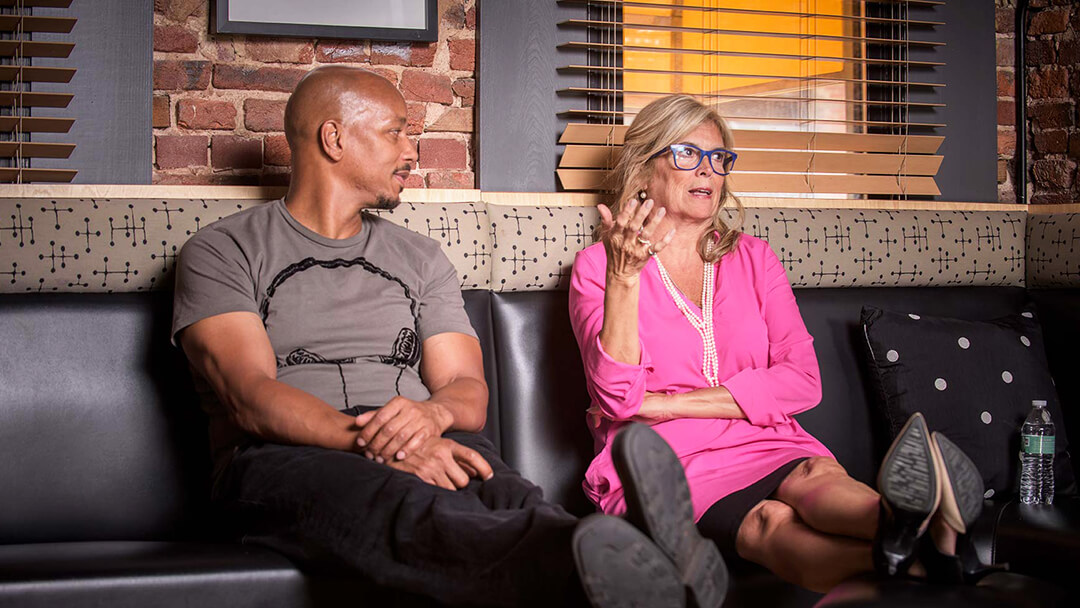 LD: And you’re a motivational speaker. Tell me about that. Motivate us.

K: I talk to young people because I was that class clown that got set back in the tenth grade. So when I talk to them, I explain the ups and downs they may go through. . . . I’m passionate about several things, as long as it involves helping other people. I fell in love with radio because I did this program called Reading is Fundamental. I read to some kids and one grabbed me around my leg and started thanking me for coming to this poverty-stricken area. The feeling that I got was just: This is what I want to do. I want to help people. Radio is about serving the community, disseminating information, and having fun. That’s the way I think about it, because if you’re the voice of the people in your time slot, you have to give them something.

LD: I’ll tell you the best true story that ever happened to me. It’s the highlight of my career. My husband used to be on staff at a big church. These two girls came up after the service and told me how they grew up—their mom was a drug addict and an alcoholic—and they said, ‘You were our mom. We listened to you every morning.’ How do you ever beat something like that? That’s the personal connection of radio. It’s more than just somebody playing the songs you like.

K: You just never know what your reach is.

LD: The radio is a very personal medium. It’s really unlike anything else.

K: I love the passion of the business. I told my boss, when I stop having fun, I’m just going to not come in.

LD: You have to keep it fresh. You can tell when somebody’s mailing it in. Fun is important to me. It’s one of the reasons I got into radio. You know, the whole ‘theater of the mind’ idea. I want it to be interesting. I want to serve the audience. If you’re not flexible and you’re not willing to grow and evolve and move and change, then . . .

LD: You want to be relevant. If there comes a day when I don’t want to go to one more concert or Preakness event, that’s when I just need to go, ‘Okay.’

K: It’s fun reinventing yourself. People like us have been doing it for a while but you know there’s always a young person just waiting for it—gunning.

LD: You want to be the one to say when you’re ready.

K: It’s so different from anything else I could be doing. It’s just so much fun.

LD: It is fun. It’s a fun job. You get so many unique opportunities.

K: I hope the people listening are having fun, too.