Baltimore magazine is America's oldest city magazine, celebrating Baltimore since 1907. Whether Baltimoreans want to know which crabhouse has the best hardshells or whether they want to read award-winning feature stories about prominent people, arts and culture, and sports, they know that Baltimore magazine offers the best coverage of the city.

Baltimore magazine is published by Stephen A. Geppi. Born in the “Little Italy” section of Baltimore, Maryland, Geppi turned his childhood love of comics into the world’s largest distributor of English language comic books.

Steve learned at an early age the importance of hard work having had to leave school to support his mother. As a young man he took a job with the U.S. Postal Service. Then, with nothing more than a hobbyist’s intuition, he realized he could earn a better living selling comic books than at his job with the postal service. He opened a small store in the Baltimore area, which quickly expanded to four stores. He subsequently moved into the comic book distribution business by purchasing a failing distributor. Armed with an extraordinary memory and intuitive sense of people, he successfully expanded his distribution business throughout North America and Europe.

An avid baseball fan, who as a youngster dreamed of playing professional ball, Steve realized a lifelong dream when he became part of the local ownership group of the Baltimore Orioles in 1993. Throughout the major league baseball season, he attends almost every Orioles home game.

In 1994, he moved into the publishing arena with the purchase of Baltimore magazine, the nation’s oldest city magazine. He further expanded his publishing ventures with the formation of Gemstone Publishing Inc., which acquired Russ Cochran, Publisher and Overstreet Publications. Gemstone publishes the comic book industry “bible,” The Overstreet Comic Book Price Guide, the North American editions of Disney comics, the classic EC Comics line and other projects. 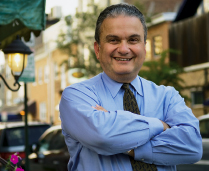