The ETC president and the Notice and Comment CEO talk tech incubators, the battle-ax as a symbol, and finding future entrepreneurs in West Baltimore. 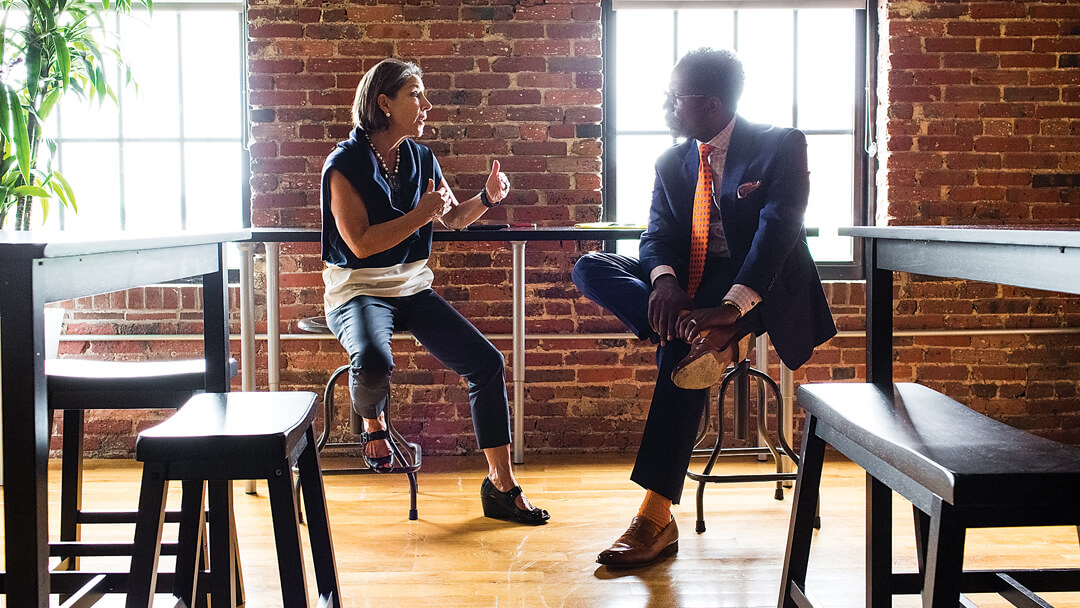 Deb Tillett and John Davis sit down for a talk at the Emerging Technology Centers In July. – Justin Tsucalas

As a video game veteran, Deb Tillett has been in the tech field for nearly 30 years, most recently becoming president of Emerging Technology Centers (ETC), an incubator and communal working space for emerging businesses in Highlandtown. One of those startups is led by John Davis, CEO of Notice and Comment—a platform that digitizes the interaction between the public and government.

John Davis: We’d normally be sitting in her office, yapping, laughing, maybe with a glass of beer.

Deb Tillett: At four-ish in the afternoon.

DT: [Referencing the Baltimore photographer] Does this table make me look fat?

JD: [Laughs] There is nothing that makes you look fat.

DT: I used to be a stylist for a fashion photographer and that’s all we were worried about.

DT: Yeah, me too. I mean, look at the two of us. We didn’t even coordinate and we’re both in blue.

DT: That was the first business I launched: fashion photography. And then I jumped right to computer gaming, once I figured out what a computer game actually was. And when somebody said, ‘How can you do that?’ I was like, ‘Well, I’ve been selling people things they don’t know they want for a long time.’

JD: What do you see as the difference between the young and the old entrepreneur?

DT: Well, we grew up in a time when technology didn’t drive everything. I bet you don’t know how to use an IBM Selectric typewriter, and I do. [The young mentality is] ‘Right now, I’m an app away from making my millions’ because a lot of this stuff is done for you via technology.

JD: Do you think the work ethic is different?

DT: No, actually, I don’t. The computing power on this phone right here in front of me, it’s incredible. But in order to really [launch a startup], you’ve still got to put in the hours.

JD: It’s true. In some ways, myself included, we feel like we’re coming out of law school and interested in being our own boss.

DT: Is that your motivation?

JD: I think in a lot of people’s cases, it is. As opposed to just trying to get rich, the main driver is to have some control over your life.

DT: We’ve done a disservice to entrepreneurs by romanticizing it. And so being an entrepreneur is now just like being a rock star or a sports star, and guess what? Those guys work really fucking hard.

JD: That actually brings up the perfect question, which is the ‘startup blues.’ You know those blues? The ‘I-can’t-find-a-programmer blues?’

JD: You know about those blues.

DT: Say that for me in English.

JD: Well, ever since the Queen of England, you’d go to the court and throw tomatoes when they said they were going to increase your taxes. That goes back to the founding of our country. One of the first acts of the first Congress said that the government must post a notice of all bills, orders, resolutions, or votes in at least three newspapers. This would allow the public to comment on those notices. That’s still a part of our society.

DT: What you’re doing is making sense of those comments?

JD: We’re digitizing those comments and it allows decision- makers to have a better sense of public sentiment. We’ve had the opportunity to demonstrate it at the White House twice and at several federal agencies, and are in the process of starting a partnership with IBM.

DT: That’s great. I see the path from law to entrepreneur because you were a prosecutor.

JD: I was. I grew up in Seattle and came to Howard Law School to get in the mix. My advocacy was in criminal law. Then I joined the Justice Department and became the chief of the homicide unit in the Caribbean in the height of the war on drugs. It became time to quit that—time to take off the bulletproof vest and try a different lifestyle.

DT: You seem like you never thought you could fail. I tell people, if you think you’re going to fail, you will. The other thing is that entrepreneurship is a marathon. You need to train. You need to prepare for the cramp at mile 16.

JD: I just read something that you’re speaking to. Farming is like being an entrepreneur. That is, seasons matter. You plant during the right time of the season, you harvest, you fertilize. You pay attention to the smallest detail. You prune.

DT: If it’s not working, you change crops.

JD: Timing is everything. And there are so many cool things about being at a place like an incubator. I’ve been in a lot of different environments. I’ve never been in one quite like ETC.

DT: I do pride myself on the fact that I’m one of the few incubator managers [in Maryland] that’s actually ever started my own company.

JD: I bet you’re also the only one who has a battle-ax in front of her office. [Laughs] It’s so intimidating because it says, ‘This lady is serious.’ It sends the signal to get to the damn point. I take it as a really positive thing.

DT: The real point of the battle-ax was at [ETC’s] opening I was thinking, ‘Anybody can use a pair of scissors for a ribbon cutting.’ So I gave the council members and the mayor the option of using either the battle-ax or a Star Wars lightsaber. And the mayor chose the battle-ax.

JD: While it’s a cool backstory, it remains a symbol. But the thing here is it’s a great communal open space. [Guy walks into a nearby bathroom.] And that was a perfect example!

DT: We try and engineer creative collisions here. So that you are running into Mark at Tivelon, who’s running into ByteLion, who’s doing work for SameGrain.

JD: When I brought our company here, my thought was we were working on a secret project, and then I realized no one is really competing. So I’d be listening to [the creator of social health app] SickWeather and he’s working on another round of financing. The way my man is working the phones, I’m thinking, ‘Oh, he’s good! Oh, I’m stealing that line.’ . . . My take on it is that competition is a good way to complement . . . and that the small size of the city allows you to meet movers and shakers.

DT: You’re one degree of separation to everyone you need to talk to.

JD: Right. People that would be much more difficult to meet in New York or Los Angeles, whereas here you might have them knock on your door. That’s one of the reasons I prepare every day, because it’s a place like here where folks will walk in unannounced.

DT: I get asked a lot what a typical day is like for me here and I always say it’s like a day at the improv because you just don’t know what to expect. I need to be prepared to talk about the 103 companies we work with, to talk about how we’ve brought up to $1.9 billion in outside investment to this region. My job is to create jobs. And every time you hire someone, they pay taxes and the city of Baltimore benefits. We’re all going to DiPasquale’s for lunch. And we can’t be sitting here talking to each other and having pictures of us taken without realizing that we’re outliers in the tech community. I’m a woman. You’re a minority.

JD: I did look in the mirror—it is true. I’m a black dude. [Laughs] . . . For years, I’ve been a professor, most recently at George Mason University, in ethics and free speech. But you can’t really teach entrepreneurship in a classroom. And, from the standpoint of high schools, what we want to do in West Baltimore and other parts of our city is provide opportunities. How do we teach the necessary steps to be an entrepreneur?

DT: We’re talking about experiential learning, I think. There are many people who don’t know there is something else out there besides their community. The challenge, for you and for me, is how we take it to places and spaces. You were talking about enabling Wi-Fi in neighborhoods and church basements.

JD: The hot spot thing is a big deal. There are huge areas of this town where people are on prepaid phones. You can’t surf on your phone when you’re paying by the hour. There’s no free Wi-Fi in places that need it.

JD: Yes! It’s not so much about building the phone—we need to show people how to use it to make money. I want to see the entrepreneurship experiential thing more integrated into schools.

DT: We have to site [kids’ entrepreneurship advocates] NFTE, Code in the Schools, Digital Harbor Foundation, and Lance Lucas. There are a number of initiatives, but the point is we all have to work on this together.

JD: It is our future.

DT: With prepaid phones, people are doing incredible things in these communities. They’re creating their own Ubers, but they’re not calling them Ubers. Some of those underserved communities are extremely enterprising because they have to be. There’s no one who isn’t getting creative. What we need to do is make opportunities available and possible.

JD: I’m a transplant, a Seattle boy that went around the world and came to Baltimore. The thing I recognize about Baltimore is it identifies its social settings by high school. That’s a community thing. It’s a blue-collar town of people who are used to working. With that community mindset and hard-work ethic, it will continue to be a great tech hub.