At the Space Telescope Science Institute, Kenneth Sembach is leading the next great mission into the cosmos. 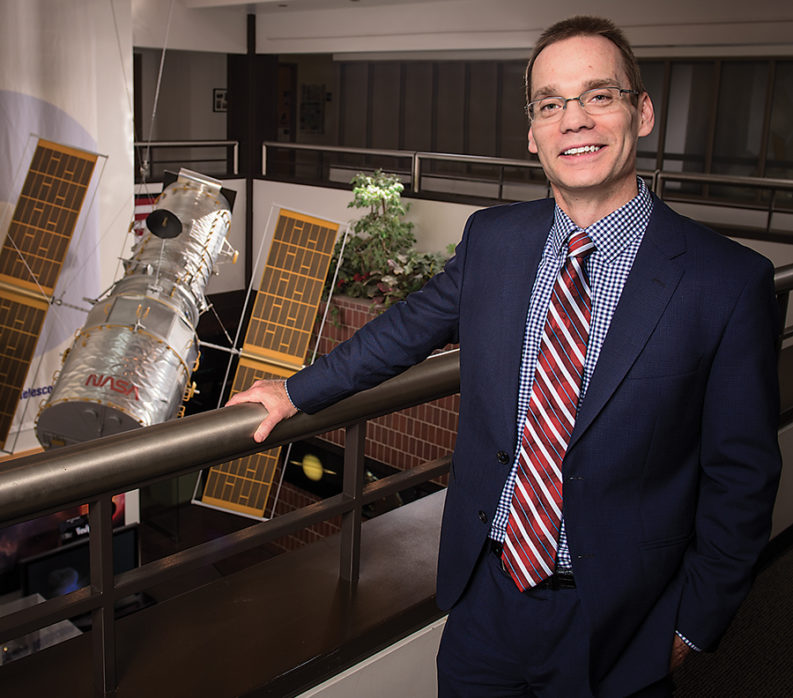 Kenneth Sembach at STScI, in front of a model of the Hubble Space Telescope. -Photography by Mike Morgan

Kenneth Sembach was just a fifth-grader in suburban Chicago when a book report set the course of his life. He was perusing his school’s library, looking for a worthy title, when the bell rang. “I was out of time,” he recalls now, nearly 40 years later, a faint Midwestern lilt still detectable in his measured, thoughtful speech. “I picked up a book on the shelf—I had to have something—and it was a small field guide to the stars. . . . So I would go outside at night and see if I could find these things. This sparked my imagination, and I’ve been in love with it ever since.”

The “it,” of course, is astronomy. Or maybe the universe. Or maybe scientific discovery. Or maybe all three. In any case, Sembach is still staring up at the sky in wonder, asking questions—only now he’s in a position to answer them.

Sembach is the new director of the Space Telescope Science Institute (STScI)—a facility located on the Homewood campus of The Johns Hopkins University and operated by a consortium of astronomical research universities for NASA. In a beige office building off San Martin Drive, he now leads some of the world’s best minds—a Nobel Prize winner among them—in some of mankind’s most ambitious scientific endeavors.

The most famous of these undertakings is the Hubble Space Telescope for which STScI runs science operations. The data that Hubble has sent back and STScI scientists have analyzed has transfixed astronomers and the public at large, most dramatically via exquisite images of swirling nebulae, billowing dust clouds, and kaleidoscopic galaxies.

In October 2018, Hubble will get a companion in the skies—the James Webb Space Telescope, affectionately known as “the Webb.” Though as monumental a project as Hubble—which has, among other things, helped astronomers determine the current rate at which the universe is expanding—the Webb will differ in several key ways.

Unlike Hubble, which circles the Earth in a low orbit, Webb will be propelled a million miles into space and parked. Operating just a few degrees above absolute zero, it will be able to look back through time to detect the dying embers of some of the first stars and galaxies that formed not long after the Big Bang.

That is, if all goes according to plan. Because of its distance from the Earth, the observatory will not be serviceable like Hubble is—“so,” acknowledges Sembach, “it has got to work.”

The reason for the distance is because the Webb, unlike Hubble, is primarily an infrared observatory, meaning its instruments will distinguish wavelengths of light that are beyond the visible spectrum (aka ROYGBIV), but that can suggest temperature. If it were in orbit around the Earth, the heat from the planet and the sun would interfere with its readings. And we want those readings crystal clear. They will help answer some of mankind’s most enduring questions.

On a dreary November day, just a little over two weeks into his tenure as STScI’s fifth director, Sembach sits perched on the edge of a couch in his unnervingly neat third-floor office. (“That’s ’cause I’ve just moved in. Give it time, give it time,” he cracks.) He has just come from giving a pep talk to some of STScI’s approximately 650 employees. With the telescope still in pieces around the country and staffers buried in minutiae prepping for its assembly and launch, he says he reminded them to take the long view.

“You come and you work on it every day, and sometimes it just doesn’t sink in,” he says, “but you step back and you say, ‘Wow, that was something really great that we did.’”

To illustrate the difference Webb’s infrared view of the cosmos will make, he pulls up side-by-side images taken by Hubble of towers of interstellar gas and dust in the Eagle Nebula known as the “Pillars of Creation.”

One of the images, taken using visible light, is ethereally beautiful, like a detail from a ’70s rock concert with a kick-ass laser light show and smoke machines on full blast. But the other, taken using infrared light (Hubble has limited infrared capabilities), is so sharply, densely brilliant with stars that it resembles a close-up of a diamond-encrusted dress.

“If you want to look into clouds of gas and see stars forming . . . the infrared light’s longer wavelength just kind of goes right in—or in this case comes right out—so you can see
objects that are enshrouded in dust,” Sembach explains.

But it’s not just about clearer images. It’s about what those images can tell us—and it’s a long list.

“We can answer questions like when did the first stars and galaxies form. . . . Those first stars that formed black holes and were the nuclei for galaxies, what did they look like? When did those stars and black holes start shaping the medium around them? How did those galaxies evolve over 13 billion years to the kinds of galaxies we see today? How do stars form? We still don’t really know how stars form. That’s kind of amazing,” Sembach says.

Then there is the wish-list question.

“Obviously, whether we know it or not, we’re on this quest to find out whether there are other planets like the Earth out there,” he says. “We have a chance now, probably not with Webb, but you never know. We’ve done things with Hubble we would have never thought of.”

There is one more major difference between Hubble and the Webb, and that is that STScI can claim the Webb in a way it never could with Hubble. Of course, STScI has been and will continue to be deeply involved with Hubble, but mission control for that observatory is 30 miles down 295 in Greenbelt. But for Webb, both the flight and scientific operations will happen at STScI. In fact, the command center at STScI is under construction right now. “Once it’s up in the sky,” Sembach acknowledges, “it is, for lack of a better term, ours.” Which means that, to a very large extent, it’s also his.

If you have to rest the weight of an $8.7 billion space-exploration project on one person’s shoulders, Sembach seems a good choice. After receiving an undergraduate degree in physics (with honors, naturally) from the University of Chicago and a Ph.D. in astronomy from the University of Wisconsin–Madison, he earned a three-year fellowship at the Massachusetts Institute of Technology. Following that, he stayed on at MIT for a year and a half before coming to Hopkins to work on a project involving ultraviolet light. He joined STScI in 2001 as an instrument scientist for Hubble and, as he says, “moved up the food chain here.”

“Once it’s up in the sky, it is, for lack of a better term, ours,” says Sembach.

He notes that this assignment, which is as much about team-building and leadership as it is about scientific know-how, has arrived at a good time in his career.

But there are other things in life besides work, even for Sembach, who rarely takes vacations and says he is “on call 24 hours a day, 365 days a year.” When asked to name his hobbies, he cites gardening, woodworking, and running, but you get the impression he could survive without them if he had to. Only one thing seems to truly rival his passion for work.

“I spend a lot of time talking to Marguerite,” he says, referring to his wife, Marguerite Hoyt, a writer, historian, and former women’s studies professor at Goucher College. “One of my favorite things to do is just sit at the coffee shop and talk with her. We talk about everything, what she’s doing, what I’m doing—science, history, politics.”

The couple met during their first day of freshman orientation at the University of Chicago, and their union, by both accounts, is rare in its compatibility and devotion.

“We’re very close. We are absolutely a real team,” says Hoyt. “It’s as simple as, when he gets home every night, we cook dinner together. He does all the chopping, and I do all the cooking. My mother has said, ‘You guys are like a ballet in the kitchen. You work together so well.’ And we do. It’s almost like we can read each other’s minds sometimes.”

And though Hoyt admits her husband’s job can be an occasional inconvenience, she has long since accepted its central place in their life.

“A long time ago, just before we were getting married, I was complaining about him being an astronomer and being out of town all the time and working all the time,” she recalls. “And another astronomer’s wife, who is a friend of mine, she looked at me and she said, ‘Hey, wait a minute. You knew exactly what his job was going to be when you got together with him. So you can’t complain about this.’ And I thought, ‘She’s absolutely right. I cannot complain about this because I knew this is what his life would be and what he wanted so badly.’ You kind of have to make peace with that.”

A few years ago, Hoyt quit her job at Goucher and now devotes herself to creative writing projects and keeping the home fires burning at their house in Ellicott City. She says she doesn’t regret leaving academia and takes pride in her “tiny contribution” to her husband’s noble mission.

And it is noble—though Sembach is too Midwesternly modest to use the word himself. But it is obvious he thinks of the Webb as the next great leap for mankind.

“James Webb is the largest science project this country is doing,” he says. “It’s going to be amazing, it’s going to be absolutely amazing. At some point, we’re going to look back and say, ‘Oh my gosh, we did that.’”